Registration is free and easy!

Your shopping cart is empty!

Login
Recent View Products ×
Has no content to show ! 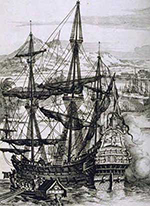 On September 4, 1622 the Tierra Firme flota of twenty-eight ships left Havana bound for Spain. With it was carried the wealth of an empire; Silver from Peru and Mexico, gold and emeralds from Colombia, pearls from Venezuela. Each ship carried its crew, soldiers, passengers, and all the necessary materials and provisions for a successful voyage. The following day, the fleet found itself being overtaken by a hurricane as it entered the Florida straits. By the morning of September 6th, eight of these vessels lay broken on the ocean floor, scattered from the Marquesas Keys to the Dry Tortugas. In them were the treasures of the Americas, and the untold stories of scores of Spanish sailors, soldiers, noblemen, and clergy.

The heavily armed Nuestra Señora de Atocha sailed as Almirante, or rear guard, of the flota, following the others to prevent an attack from behind the fleet. For additional protection, she bore the name of the holiest of shrines in Madrid. She had been built for the Crown in Havana in 1620 and was rated at 550 tons, with an overall length of 112 feet, a beam of 34 feet and a draft of 14 feet. She carried square-rigged fore and mainmasts, and a lateen-rigged mizzenmast. Atocha would have had the high sterncastle, low waist and high forecastle of a typical early 17th century galeón. She had made only one previous voyage to Spain, during which her mainmast was burst, and had to be replaced.

For the 1622 return voyage, Atocha was loaded with a cargo that is, today, almost beyond belief -- 24 tons of silver bullion in 1038 ingots, 180,00 pesos of silver coins, 582 copper ingots, 125 gold bars and discs, 350 chests of indigo, 525 bales of tobacco, 20 bronze cannon and 1,200 pounds of worked silverware! To this can be added items being smuggled to avoid taxation, and unregistered jewelry and personal goods; all creating a treasure that could surely rival any other ever amassed.

The Nuestra Señora de Atocha sank with 265 people onboard. Only five -- three sailors and two slaves -- survived by holding on to the stump of the mizzenmast, which was the only part of the wrecked galleon that remained above water. Rescuers tried to enter the drowned hulk, but found the hatches tightly battened. The water depth, at 55 feet, was to great to allow them to work to open her. They marked the site of her loss and moved on to rescue people and treasure from Santa Margarita and Nuestra Señora del Rosario, other ships also lost in the storm. On October 5th a second hurricane came through, and further destroyed the wreck of the Atocha. For the next 60 years, Spanish salvagers searched for the galleon, but they never found a trace. It seemed she was gone for good. 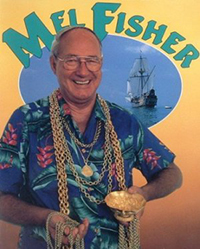 In 1969, Mel Fisher and his Treasure Salvors crew began a relentless, sixteen year quest for the treasure of the Atocha. Using sand-clearing propwash deflectors, or "mailboxes," that he invented, and specially-designed proton magnetometers, they spent long years following the wreck’s elusive trail--sometimes finding nothing for months, and then recovering bits of treasure and artifacts that teasingly indicated the proximity of the ship and its cargo.

In 1973, three silver bars were found, and they matched the weights and tally numbers found on the Atocha’s manifest, which had been transcribed from the original in Seville. This verified that Fisher was close to the major part of the wrecksite. In 1975, his son Dirk found five bronze cannon whose markings would clinch identification with the Atocha. Only days later, Dirk and his wife Angel, with diver Rick Gage, were killed when one of the salvage boats capsized. Yet Fisher and his intrepid crew persevered.

By 1980, they had found a significant portion of the remains of the Santa Margarita -- with a fortune in gold bars, jewelry and silver coins. On May 12, 1980, Fisher’s son Kane discovered a complete section of the Margarita’s wooden hull weighted down by ballast stones, iron cannon balls and artifacts of 17th century Spain. 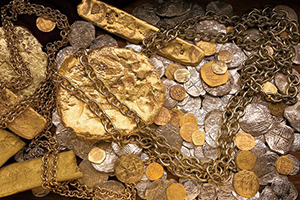 On July 20, 1985, Kane Fisher, captain of the salvage vessel Dauntless, sent a jubilant message to his father’s headquarters, "Put away the charts; we’ve found the main pile!" Ecstatic crew members described the find as looking like a reef of silver bars. Within days, the shipper’s marks on the bars were matched to the Atocha’s cargo manifest, confirming Kane’s triumphant claim. At long last, the wreck’s "motherlode" had been found -- and the excavation of what was widely referred to as the "shipwreck of the century" began.

Quickly, Duncan Mathewson, Mel Fisher’s chief archaeologist, assembled a team of archaeologists and conservators from across the country to ensure that the artifacts and treasure were excavated and preserved properly. Because the material had lain on the ocean floor for three and a half centuries, much of it was in an extremely unstable state; immediate preservation treatment was required to prevent its destruction after it left its saltwater tomb.

Today artifacts and treasures from the Atocha and Margarita form the cornerstone of the Mel Fisher Maritime Heritage Society Museum’s collection. Among the items found on the wrecks are a fortune in gold, silver bars, and coins destined for the coffers of Spain; a solid gold belt and necklace set with gems; a gold chalice designed to prevent its user from being poisoned; an intricately-tooled gold plate; a gold chain that weighs more than seven pounds; a horde of contraband emeralds -- including an impressive 77.76 carat uncut hexagonal crystal experts have traced to the Muzo mine in Colombia; religious and secular jewelry; and silverware.

With the treasure, and perhaps ultimately more important, were countless articles that provide insight into seventeenth-century life, especially under sail: rare navigational instruments, military armaments, native American objects, tools of various trades, ceramic vessels, galley wares, even seeds and insects. A portion of the Atocha’s lower hull were examined and then recovered to be stored in a protected lagoon at the Florida Keys Community College, making them readily accessible to interested researchers.

Following a long conservation process, the many of the artifacts from the Nuestra Señora de Atocha and Santa Margarita are now on permanent display at the not-for-profit Mel Fisher Maritime Museum. Approximately 200,000 people visit the Key West museum annually to marvel at them -- and applaud the triumph of the human spirit that their recovery represents. 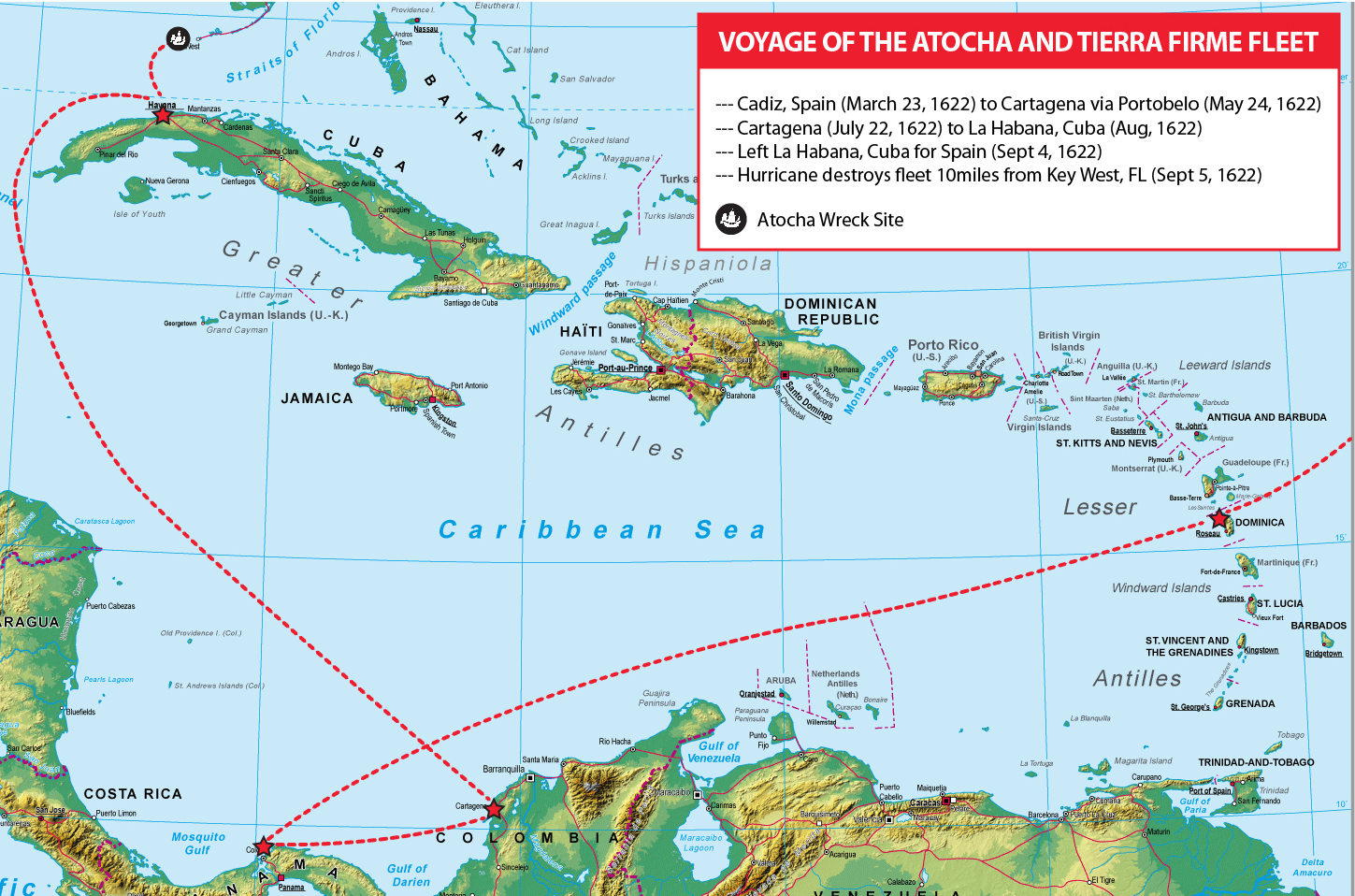